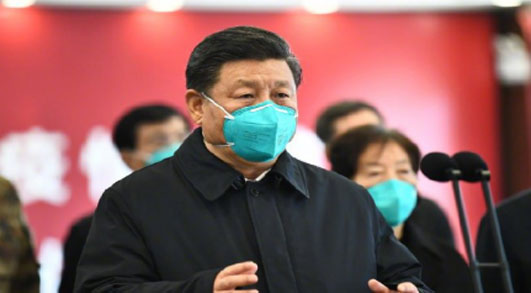 During his inspection of the hospital, Xi, also general secretary of the Communist Party of China Central Committee and chairman of the Central Military Commission, learned of the hospital's construction and operation, admission and treatment of infected patients, medics' protection and protective supplies, and scientific research on the virus. He also visited the patients and conveyed his greetings to the medical workers on the front line of the fight against the epidemic, encouraging them to have strong confidence in winning the battle against the epidemic.

Xi expressed gratitude to local residents and frontline workers who were playing key roles in the prevention and control of the disease.

Xi arrived in Wuhan on Tuesday morning to inspect work on the prevention and control of the novel coronavirus.During the tour, Xi will also pay visits to police officers, government officials and volunteers. Xi expressed condolences to Chinese people who died in the novel coronavirus disease (COVID-19) epidemic, and people who sacrificed their lives fighting on the front line.

On behalf of the Communist Party of China (CPC) Central Committee, Xi, extended greetings to all Party members, cadres and people in Hubei Province and its capital city of Wuhan.Xi also sent his respect to medical workers, military officers and soldiers, community workers, police officers, officials, volunteers and people of all fields who have been fighting the epidemic on the front line.He expressed sympathy to patients who are combating the disease and their relatives, as well as families of those who died of the disease and those who died on duty.

Back
Last One:
Ministry ‘appalled’ by US,EU rights abuses
2020-01-08
Next Article:
The General Administration of Customs has pushed forward new measures
2020-03-11

Our vision
Quality is our foundation, sincerity is our principal.
Products